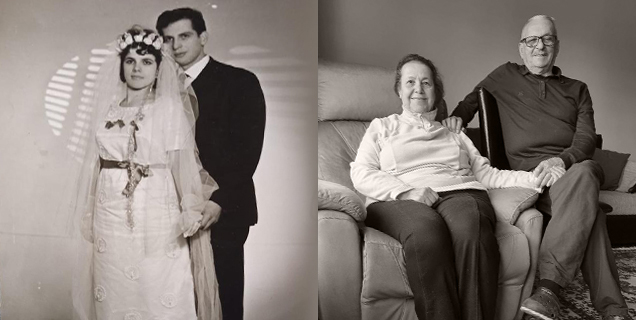 Ayşe was born in Uşak in 1950. Ms. Ayşe was raised by her grandmother since her mother passed away when she was very young. Her grandmother was a veteran woman for Ayşe, as she had to weave rugs to cope with financial difficulties while raising Ayşe and her siblings. Her father struggled to ensure that his children study and have a profession in the future. Her interest in tailoring started at very young ages as she was making dolls and sewing dresses for them while playing with her sisters and friends from the neighborhood. She began to work at young ages after being trained by the tailor in her neighborhood following graduation from primary school. Her work life ended 15 years ago as she retired.

Her first experiences of being a tailor were sewing wedding dresses and she met the woman who would be her mother-in-law in the future as she came to the tailor shop with a customer. Thanks to that woman who really admired Ms. Ayşe, she met her husband, Mr. Tuncay, and they got married in 1968. The couple has 2 daughters, 1 son and 2 grandchildren from each child. According to Mr. Tuncay, they maintain this long marriage by holding onto their happy memories in spite of negative experiences.

What Does He Do Now .

Starting the day early, the couple does their morning exercises after praying. This way, they do not rust up their joints, Mr. Tuncay adds by smiling. Then, they chat while drinking hot water with lemon prepared by Mr. Tuncay and this is the most joyful moments of their days, says Ms. Ayşe. They like to cook together in their free time and share these meals with their children, grandchildren and friends. Saying that they really enjoy talking to their children and grandchildren on the phone, the couple says these chats give them a motivation of life.

They state that they are very glad to be visited by their children and grandchildren and spend time together in various holidays. Mr. Tuncay says they have a great time in their family holiday with a group of almost 25 people on the seaside once a year.

Definition of Elderliness for Them

Mr. Tuncay says each age brings a different happiness and adds “We still feel young”. He says they will accept being elderly people when they start using walking sticks. He says he will not feel old as long as he can manage all daily works by himself.

Ms. Ayşe says elderliness is a concept that one feels in the soul.

Changes in Their Lives Brought By Elderliness

According to Mr. Tuncay, driving large vehicles like lorries, trucks and buses is legal until the age of 65 and he started using small vehicles after 65. He states that this change in terms of driving vehicle was a result of getting old.

Ms. Ayşe says they had the chance to spend more time together at home as they got older and they started to took care of each other more.

What Are The Valuable Assets for Them In The Elderly Life

This sweet elderly couple says that for them, the most volume concept is health. They identify being healthy as a great fortune. Keeping in touch with their friends and the rest of their family and spending time together are very valuable for them.

Their Thoughts About Respect to the Elderly

Ms. Ayşe says she grew up in big families with family elders and therefore, she learned to respect the elderly individuals in her family. Similarly she says they tried to guide their children and grandchildren about respecting the elderly and teach them the importance of this.

Mr. Tuncay says the concept of respect originates in family. If children are raised by learning the respect in their family, they can be respectful individuals and therefore, they show respect to the elderly, he says.

Being An Elderly Person in Turkey

According to Mr. Tuncay, being an elderly person in Turkey is challenging if you are not healthy, your income level is low and you need support from others.

Ms. Ayşe says being an elderly individual is not challenging in Turkey because they have sufficient financial-moral means.

What They Would Change in Turkey Should They Had the Chance

Mr. Tuncay smiles and responds: “We need a magic wand for this. As there is a lot to change, we have more peace as we do not have that wand”.

Advices for the Young about Preparing for Elderliness

Ms. Ayşe says they should not be too ambitious about the life.

She suggests them to attach importance to their health and try to stay healthy. Finally, she adds:

“Life is worth living despite all difficulties”

Mr. Tuncay says the young should not compromise from honesty, keep doing their religious duties, love the old and young people around them, avoid bad habits, take good care of their bodies and always remember that one day they will also get older and says:

“Life is beautiful young fellows, enjoy this beauty without stress”